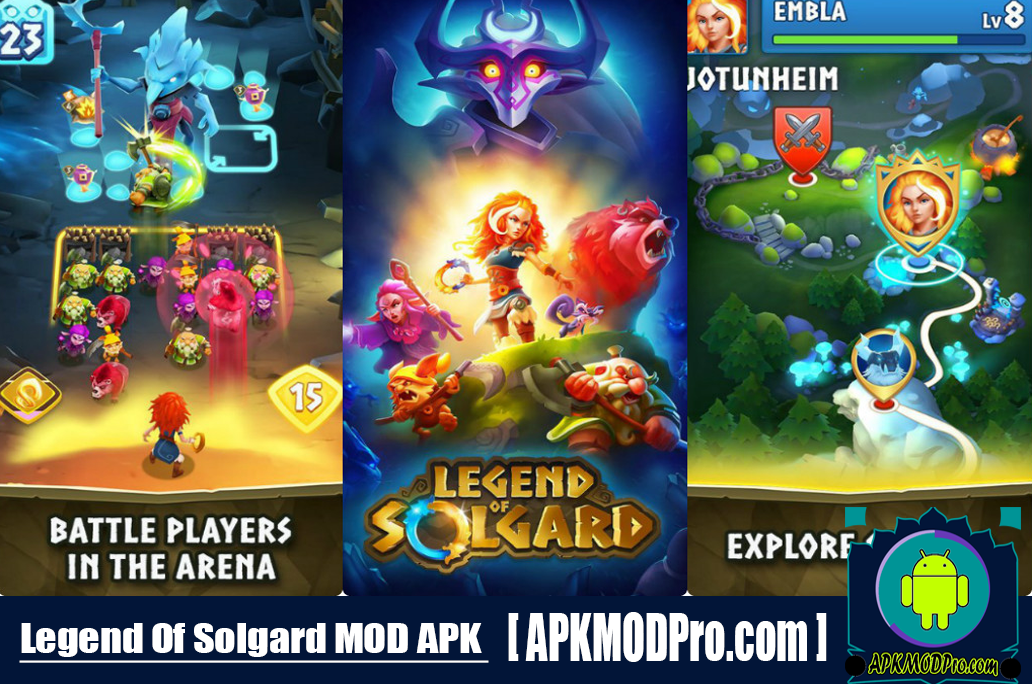 Besides to Match-3 puzzle games, the publisher King also knows how to create an exciting RPG game that appeals to players. After releasing Diamond Diaries Saga for some time, they continued to hit the market with their latest game Legend of Solgard (MOD Unlimited Energy). Although this game is an RPG, it still has many elements of a strategy game such as team building, turn-based attacks,…

Winter is coming
Legend of Solgard‘s plot has a story as in the Nordic legends. Solgard is a beautiful land where there are gods and special creatures living together happily. But one day, the Ragnarok doomsday prophecy start happening. As the winter approaches, the ice gate opens brings with mysterious monsters, causing Solgard’s creatures to freeze permanently. Embla is the only one who can prevent this from happening, she is a female warrior with the power of The Sun Godness and a friend of the forest creatures. After witnessing everything, she assembled an army of animals of special strength, taking part in the war to save Solgard from the cold winter and bring glory back to the land.

Gameplay
The gameplay of Legend of Solgard is simple. You and the enemy defend the opposite land, the central land will be the main arena. This is a turn-based game, meaning you will only attack when it’s your turn, this game allows you to move three times. The main objective of this game is to break the ice walls of enemies, but first, you must destroy the monsters guarding the ice wall in front. Meanwhile, do not forget to protect your squad against enemy attacks. If your HP is zero, the monsters will flood into your land and kill all, so you are not allowed to lose.

Every battle, size and obstacle on the battlefield will change, which forces you to think and re-adjust your strategy reasonable. In order to attack an enemy, you must arrange the three creatures of the same color into a straight line and then they will attack and deal damage displayed on the screen. There are many ways for you to combine your creatures into something stronger, for example, when you arrange four creatures of the same color into a square, they will turn into a giant creature with tremendous power. In addition, some other shapes you can arrange like T-Shapes, L-Shapes, Plus Shapes, etc.

Besides, the way you defended is the same, you have to arrange three creatures of the same color horizontally to create a barrier to block enemy damage, increase one defensive point. You should arrange not only one but many layers of defense as they can assist each other and absorb damage, healing the animals of your team.

Special creatures
The special creatures in Legend of Solgard play an important role because without them Embla will not be able to fight alone against other winter monsters. Creature systems are very similar to the champion system in League of Legends, each creature has its own story and is organized by a variety of factors such as color, race, strength and rare. There are four colors those are Red, Yellow, Purple and Green and you can only choose one color at a time.

Each creature has different roles in each game such as attack, defense, and support. Hobling, for instance, is capable of throwing an ax at an enemy, causing them to be stunned and dealing massive damage. Their skills and power depend on the races such as Warriors, Beasts, Folks, Spirits, Critters, Wyrms and Wights. One more thing that you need to consider is the rare, ie the same creature, but a rarer creature is more powerful and has more special skills. They are divided into four categories: Popular, Rare, Epic or Legendary.

Legend of Solgard
After completing the battles, your beast will gain experience points, and when you have enough experience points to level up, you can improve their stats. Each time you level up, you are only allowed to increase the stats for one of the following: Spell Power, Mana, Barrier Strength, Sun Burst. In addition, using the Sun Gems is also a great way to upgrade your creatures.

It’s time to download Legend of Solgard MOD
Legend of Solgard MOD has cute graphics, many colors very similar to the previous games of King. I believe that the bright colors and the cute characters of the game will keep you entertained after your hard working days. 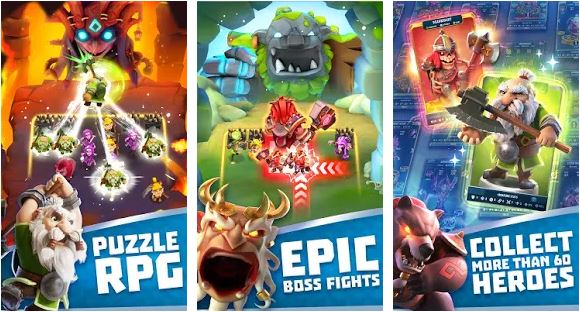 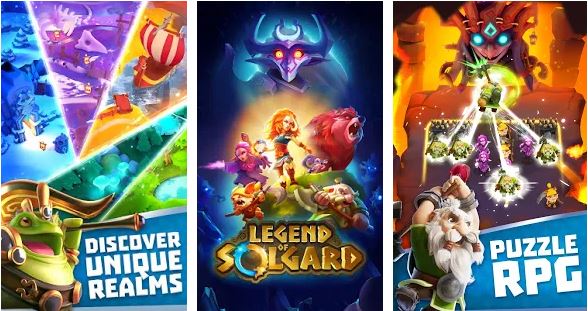 In this unique RPG, join Embla in her epic fight to stop the end of all worlds and establish her as one of Solgard’s most legendary heroes.
Use strategy to battle hordes of ice enemies, claim bounties on legendary villains, defeat epic Bosses and win the war against evil to become a true legend of Solgard.

❄️ RAGNAROK IS COMING
Battle with epic fantasy creatures, summon legendary Gods from the Norse mythology to defeat monstrous bosses and win the war against an endless winter.
Use Tactics and Strategy to combat your enemies and shutter all the ice vortexes.

🌎 ADVENTURE IN FIVE LEGENDARY LANDS
Collect allies and defeat monsters from all 5 realms of Solgard.

⚡️ HONE YOUR POWER
Grow and power up your hero and army to conquer your opponents.

The war to prevent Ragnarok has begun and each battle will require your best strategy.
Are you ready to jump in the arena, fight epic battles and enter the pantheon of Solgard’s ancient heroes? Download this RPG now and be part of the legend!

Legend of Solgard is completely free to play, but some optional in-game items will require payment.
By downloading this app on your mobile you are agreeing to our terms of service; http://about.king.com/consumer-terms/terms

You must be connected to the Internet to access full game features.

Easily sync the game between devices and access full game features when connected to the internet.

Do not sell my data: King shares your personal information with advertising partners to personalize ads. Learn more at https://king.com/privacyPolicy. If you wish to exercise your Do Not Sell My Data rights, you can do so by contacting us via the in game help centre or by going to https://soporto.king.com/

Well, that’s from the Legend of Solgard MOD APK 2.5.1 (Unlimited Energy) For Android article. Hopefully useful for all of you, thank you for visiting. if you find a page or anything that has an Error please wait in the Comments column belowsi.