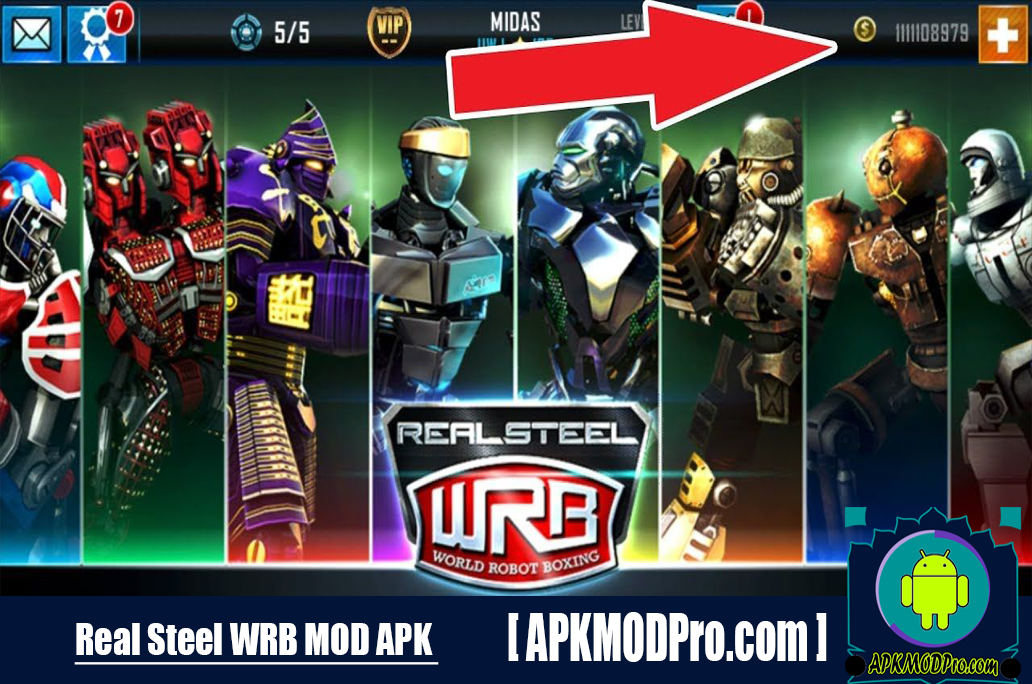 Boxing is a fighting sport between two martial artists held in many major congresses around the world, including Olympic. This sports only allows hand-to-hand attacks combined with moving legs, head, and body. Boxing has become an inspiration for Reliance Big Entertainment to release Real Steel World Robot Boxing (MOD Unlimited Money). In this game, the boxers on the arena are not ordinary athletes but they are transformation robots like in the Transformer series.

This game is the next part of Real Steel series, which has now reached more than 50 million downloads on Google Play. In addition, Reliance Big Entertainment has released many exciting fighting games, most notably WWE Mayhem.

Fight and become the champion
Welcome to Ultimate World Robot Boxing Champion, the tournament for the most powerful robots in the galaxy. The goal of all martial artists when participating in this competition is to defeat Zeus – the champion of the WRB. He has never been defeated, but nothing is impossible. The gameplay of this game is nothing new compared to the same games. In Real Steel World Robot Boxing, you will control a robot, fight and defeat each opponent to aim for the championship.

The game control is touch & sweep style, which means you only need to manipulate controls to touch and swipe to control moving characters while attacking opponents. Some skills you can choose are punch and defense (use two hands to block the opponent’s attacks). After you fight for a while, your energy bar is full indicating that you can use the ultimate skill. At this point, the game will switch to the epic action scenes between the two robots, feeling like I’m watching a part of Transformer movies.

Sometimes, Real Steel World Robot Boxing gives you suggestions for you to know what to do next. But doing each move according to the instructions is not enough, you need to know the combination of attacks to create continuous combos. When the game ends, there will be a winner and one fighter who knocked out, do you want to be the winner in this game?

Robot titan
Not the usual boxers, 58 robots in the game are 9 feet tall and weigh about 2000 pounds, so the matches promise to be dramatic and fierce. You have the opportunity to meet the familiar titanium robots of the Real Steel series – Zeus, Atom, Noisy boy and Twin Cities. In addition, Real Steel World Robot Boxing has many new robots including Touchdown, Blockbuster, Biowar, HollowJack, …

Not stop there, the game allows you to customize and upgrade your robot. Paint Shop is a place where you can freely create unique colors for robots. Not only is the champion in the tournament, but you can also be the champion in style.

Modes
Career mode is where you build your boxing career from amateur to the champion of World Robot Boxing. Besides, you can challenge your friends or other players across the globe by joining Multiplayer (connecting with friends via wifi and Bluetooth). Beat them and win the top in ranking. In addition, Real Steel World Robot Boxing has many other interesting modes waiting for you. Don’t miss!

Graphics
Real Steel World Robot Boxing possesses stunning 3D graphics with voyeuristic action scenes, realistic to every detail. The image quality and effects of the robot are extremely flawless. With realistic sound, you can feel the weight of punches launched by giant machines. When playing this game, I feel like watching a battle between Optimus Prime V Megatron rather than a mobile game.

Overview
Within the limits of an article, I can’t say all the great things about this game. If you like fighting games on mobile, Real Steel World Robot Boxing is a game that you cannot ignore. This game is free for both iOS and Android operating systems, you can download it via the links below. 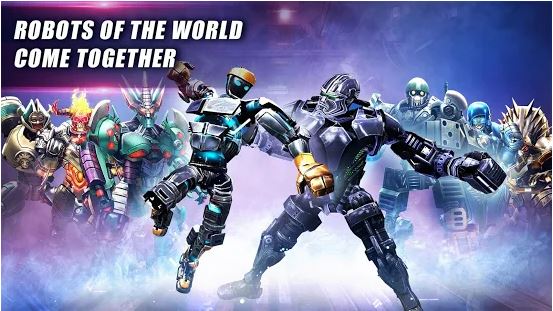 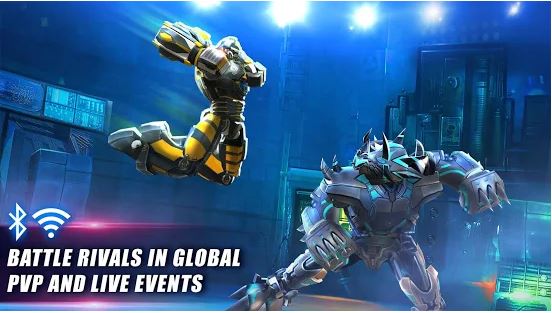 Join Atom, Zeus, Noisy Boy, and many more of your favorite Robots in the battle for supremacy of the Real Steel universe. This exciting action-fighting Robot Boxing and Brawler brings the heroic storytelling and spectacular action from over 100 years of Robot Fighting on to your mobile device! Top the Leaderboards, claim the Championship title and reign supreme as the Ultimate World Robot Boxing Champion. Win big in Versus Leagues & Global Tournaments.

BRAWL WITH REAL-TIME WITH FRIENDS
Unleash your true self in live local Wi-Fi & Bluetooth multiplayer and earn bragging rights while enjoying the winning moment!

EXPERIENCE REAL SPORTS ACTION
Build a roster of your favorite sport robots and take on the Legends in enthralling arenas and stadiums.

UPGRADE & COLOR YOUR CHAMPION
Fight and Upgrade your robot to be stronger, faster and meaner. Color your robot, express yourself and have some fun in the Paint shop!

SHOWCASE YOUR TRIUMPHS
Win Challenges and exhibit your achievements in an all-new Trophy Room.

RELIVE THE INSPIRING MOVIE
Play the official boxing game of the blockbuster movie Real Steel. Take your robot champion from the movie for amazing title winning experiences in this smash hit sequel.

The game is also optimized for tablet devices

This game is completely free to download and play. However, some game power-ups can be purchased with real money within the game. You can restrict in-app purchases in your store’s settings.

* Permission:
STORAGE: for saving the data and progression.

Well, that’s from the Real Steel World Robot Boxing MOD APK 45.45.116 (Unlimited Money) For Android article. Hopefully useful for all of you, thank you for visiting. if you find a page or anything that has an Error please wait in the Comments column belowsi.